The Story of Jesse James

Join the discussion group on topics related to Martial Arts, Boxing, Wrestling and MMA. Share your experience or pose questions to our Moderators.

The Story of Jesse James

THE STORY OF JESSE JAMES
By Norman Miller
Reproduction: Two part installment published in Strength and Health magazine in Dec. 1930 and Jan. 1939
Special thanks to Daniel Joseph, contributor.

"Jesse James - handsome, powerful, fast as light. Built his body from a slender country lad to the fine proportions shown here. This is a story of a slender country lad of mixed parentage who climbed the hard road from an ambition born during his immaturity, to the heights in the wrestling world. Always ambitious to be strong and to excel physically.  Jesse James planned his own destiny the night he saw Jimmy Londos wrestle near his own hometown in Texas." -Norman Miller

Peter contributed the article, I just had asked if anyone here might have it.

Many thanks again Peter for finding this article for me and thank you Diane for transferring it into e-book form, I really appreciate it guys!

This article was a great & informative read and I certainly enjoyed it! Great photos too, I particularly like that photo of the contract signing between Jesse & Jim Londos with legendary promoter Ray Fabiani. The author, Norman Miller, really put Jesse James over big in his article too, which I like. I didn't know Jesse James was into weight training and wrote to York Barbell/Bob Hoffman, nor did I know that a match between greats Jim Londos & Ray Steele was what inspired Jesse to become a wrestler himself. Cool stuff for sure. Lots of great name drops by the author mentioning legends the likes of Stanislaus Zbyszko, Ed "Strangler" Lewis, Milo Steinborn & Hans Steinke and mentioning matches Jesse had with greats like Jim Londos, Leroy McGuirk, Danny McShain & Danno O'Mahoney. I can tell you that Jesse James never did become the World Heavyweight Champion during his career, but he was a multiple-time World Light Heavyweight Champion, and won numerous other titles throughout his long career. Obviously when this article was published in 1938 Jesse was still very early in his career, but clearly had already found much success. He held championships as late as 1968 and was still wrestling as late as 1974. Jesse James passed away in 2000 at the age of 82/83.

Here's a photo of Jesse James 20+ years later in 1959 at around 42 when he was the NWA Southern Junior Heavyweight Champion. 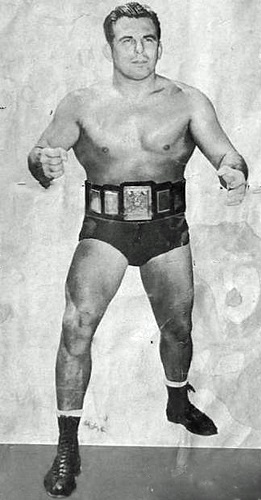 For anyone interested in seeing Jesse James in action, here's a couple videos from YouTube featuring him in matches with a couple wrestlers mentioned in the article:

This is a short clip of match between Jesse and Kimon Kudo, and may be the match mentioned in the article where Jesse lost the World Light Heavyweight Championship. He did regain it from Kudo later on. This is from 1938. By the way, Kudo was a legit judoka and eventually reached the rank of 7th dan around the time of his 70th birthday.
[video]https://www.youtube.com/watch?v=XhBbR50yDiE[/video]

This one is a match between Jesse and Karl Davis from 1953.
[video]https://www.youtube.com/watch?v=JPMxHDtKY3w[/video]


Now something interesting that the article didn't mention, and I didn't expect it would because there was no reason to mention it as it was inconsequential at the time, was that Jesse James was childhood friends with George Wagner. As a matter of fact, Jesse's family took George in when he was a teenager after both of his parents had passed away. The name George Wagner may not mean anything to anybody, but he became a wrestler as well, yet didn't find much success until the 1940s when he adopted a flamboyant, effeminate gimmick/persona and subsequently became known as Gorgeous George, "The Toast of the Coast" & "The Human Orchid". And by the late 1940s with the advent of television Gorgeous George became the biggest star & money draw in all of professional wrestling (& one of the biggest stars & draws of all-time period) as well as a mainstream star & pop culture icon. It's said that with the possible exception of Milton Berle, nobody was more responsible for selling TVs in the late 40s & early 50s than Gorgeous George.

In addition to George, Jesse's brother Johnny James also became a pro wrestler (Jesse & Johnny won the NWA Southwest Tag Team Championships in 1954) as did two other childhood friends of the three, Sterling Davis (who became a star as Dizzy Davis) and Chester Hayes. They all grew up in the tough Harrisburg neighborhood in Houston, TX and collectively became known as "The Harrisburg Rats". I don't know that referring to them as a "gang" would be correct, but they were a group of rough & tough neighborhood kids who ran around streets, got into fights & such. Gorgeous George obviously became the biggest star & most successful of the bunch as a pro wrestler, but Jesse James & Dizzy Davis were stars and had great careers too, Johnny James & Chester Hayes though weren't nearly as successful as the other three.

Finally, here's a video of a match between childhood friends Jesse James & Gorgeous George from the early 1950s (I wanna say '51), including all of the pomp & circumstance that went along with GG's entrance & intro.
[video]https://www.youtube.com/watch?v=5_Ka6WlzaaQ[/video]
Top

A BIG THANKS TO DIANE FOR POSTING THIS AND ALSO TO DANNY FOR ADDING A LOT MORE INTERESTING INFORMATION ABOUT JESSE AND OTHERS. VERY ENJOYABLE READ AND VIDEO CLIPS.
THANKS, PETER.
Peter Yates
Top

Jessie is my great uncle. My grandpa is (was) his brother, Johnny James who also wrestled. What a treat to watch these videos.
Thanks
Danielle
Top

Hi Danielle, welcome to the forum. Do you have any stories or photos passed down in the family about either of these two fine wrestlers.
Regards,Peter.
Peter Yates
Top
Post Reply
5 posts • Page 1 of 1

Return to “Combat Arts and Sports”