Hello Alex and welcome to the HOPC forum, glad to have you aboard!

Soprano Brenda Lewis passed away back on September 16th at the age of 96. May Ms. Lewis rest in peace and may God bless & comfort all of her family & friends. 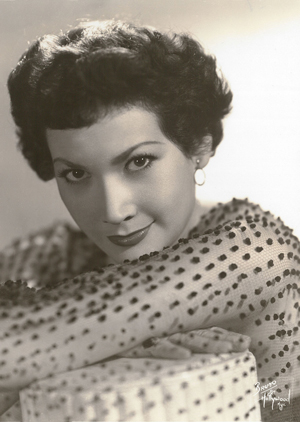 Here's a recording of Brenda Lewis in the title role of Jack Beeson's opera "Lizzie Borden" (based on the real-life case of Lizzie Borden), a role which Lewis originated in 1965.

Last night I went to the Harrison Opera House to attend a performance of Camille Saint-Saëns' "Samson and Delilah", based on the Biblical tale from the Book of Judges. It was a great performance, especially by Derek Taylor (Samson) & Katharine Goeldner (Delilah), both of whom have magnificent voices. The only thing I wasn't really a fan of, though I wouldn't necessarily say I disliked it, is the setting was changed from Biblical times to what was pretty clearly World War II era. Samson & the Israelites were dressed as Jews of WWII era and the Philistines' look was obviously modeled after the Nazis (the soldiers anyway), right down to wearing a red band on their arms, though the symbol on the band definitely wasn't a swastika. I guess the director made an artistic choice to change the setting, and while I'd prefer the setting had been kept in Biblical times, I will admit the sets and costumes all looked really great. All in all, I enjoyed the opera.

Here's a photo of the view of the stage from my seat, I was 4 rows back from the orchestra pit. By the by, the symbol there on the curtain is the symbol the Philistine soldiers wore on their arms. 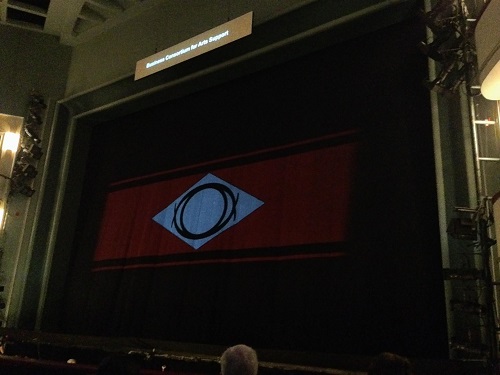 And here's a photo of the program. 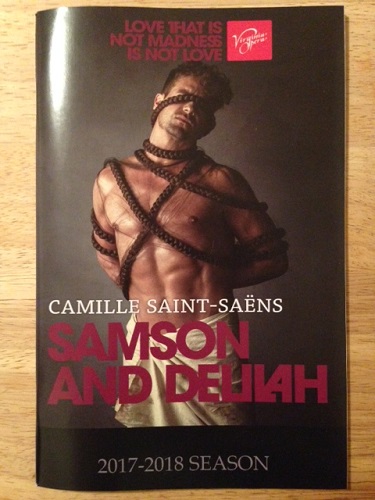 I attended the opera at the Harrison Opera House again last night, thanks to my dad buying me tickets for my birthday. I saw a performance of Giacomo Puccini's "La fanciulla del West" ("The Girl of the Golden West"), based on the play "The Girl of the Golden West" by David Belasco. The leads Jill Gardner (Minnie), Roger Honeywell (Dick Johnson/Ramirez, a role created for & originated by Enrico Caruso) & Mark Walters (Jack Rance) all particularly have magnificent voices and gave superb performances. The rest of the main cast and the chorus were great as well, including a dog which seemed well trained but was so energetically prancing across the stage & close to the edge that I thought it may jump down into the orchestra pit, lol. The orchestra was terrific, the sets & costumes all looked good and of the California Gold Rush time period (late 1840s/early 1850s), and they used rear projection to give the effect of falling snow, which looked cool. The cap guns (at least that's what they sounded like) were effective also, as they managed to startle some people in the audience when they "fired" them. All in all it was an excellent performance & a great time and I thoroughly enjoyed it.


As usual the audience can't take photos during the performance, so I can only offer photos of the view I had from my seat and of the opera program booklet. 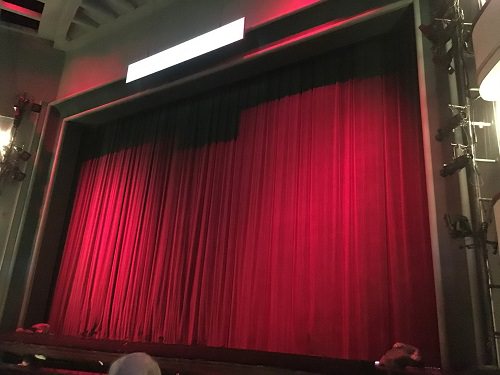 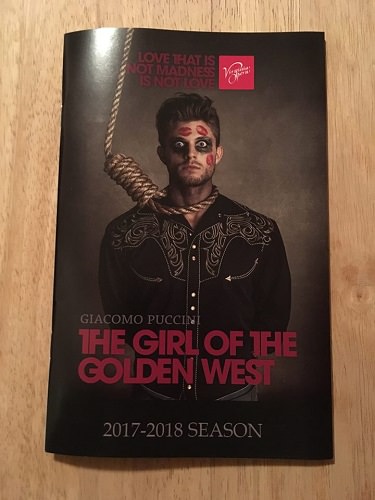