As members will know I have been contributing to this recently thanks to a promotion that Sky Cinema has been running, sadly that promotion has now ended and as a result the movie package has been removed so therefore I am restricted to just Film 4, TCM, Sony Movie Channel and Movies4Men (and therefore am not sure if any of those channels would screen movies that members would like my thoughts on)
"Great heavens, what is there to adulate in me? Am I particularly intelligent, or remarkably studious, or excruciatingly witty, or unusually accomplished, or exceptionally virtuous?"
(The Duke of Dunstable, Patience by Gilbert and Sullivan)
Top

Hey Harry,
main thing is that it is a movie that you have enjoyed and can revue.We have a wide range of interests among our members so you may be directing someone to a movie they may like to explore. For instance Danny has renewed my interest in Vampire movies and the Hammer horror series in particular. Through his revues i have discovered movies i had missed before.
Regards,Peter.
Peter Yates
Top

Harry Hayfield wrote:As members will know I have been contributing to this recently thanks to a promotion that Sky Cinema has been running, sadly that promotion has now ended and as a result the movie package has been removed so therefore I am restricted to just Film 4, TCM, Sony Movie Channel and Movies4Men (and therefore am not sure if any of those channels would screen movies that members would like my thoughts on)

Heck Harry, many/most of the films I've posted about I watched/DVRed on TCM, well assuming the TCM there in the UK is the same TCM (Turner Classic Movies) as here in the US. Anyway, I don't know how many people who come into this thread really care about the little write-ups I do on the films I've watched, but I enjoy doing it pretty well (though I'm certainly no educated/expert film reviewer by any stretch of the imagination) and I know I've at least peaked Peter's interest in & turned him onto some films as he's kindly pointed out. So Harry please do feel free to give your opinion on or review or do a write-up on (or however you wanna put it) any movie(s) that you watch.

1993 "What's love got to do with it?"
Biopic of Anna-Mae Bullock (Tina Turner).Angela Bassett and Lawrence Fishburne
are superb as is the sound track . Bassett also sports one of the most spectacular
female bodies on the planet along with feline beauty . " I want you to rock me "
done in the key of C and sung by Tina herself melts iron railings . A great flick.
Top

Hey Chris, just been playing some early Ike and Tina, have to revisit this movie.Yes Angela rocks in more ways than one and Laurence is superb as always as Ike.
Regards,Peter.
Peter Yates
Top

Ike was a great guitarist and barrelhouse pianist . Even if he'd treated Tina like a
human being their professional relationship couldn't have lasted . She was just too
vastly talented to be cubby holed into funk/R&B . Clapton , Knofler , Jagger
anyone who worked with her was blown away by how flexible and explosive an
instrument she is . Go to You-Tube and bring up "Change gonna come" with Robert
Cray and a goddess emerges .
Top

Bite the Bullet (1975) starring Gene Hackman, James Coburn, Candice Bergen, Ian Bannen, Jan-Michael Vincent & Ben Johnson. A group of individuals from vary backgrounds compete in a grueling 700-mile cross-country horse race in 1908. Bite the Bullet is a western/adventure film based on a real horse race from 1908 that spanned from Evanston, Wyoming to Denver, Colorado and was sponsored by the Denver Post, though the film plays out differently than the actual events. It's an interesting story set during the time when the "wild west" & American frontier was quickly passing into history and giving way to civilization & modernity. Bite the Bullet is a fun and enjoyable romp of a film with a great cast. 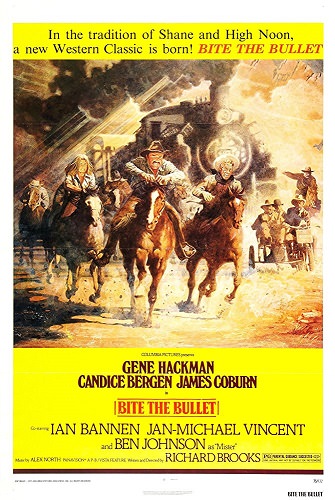 Loved " Bite the Bullet" . One of the essential Hackman films ...
Top

sticksb wrote:Loved " Bite the Bullet" . One of the essential Hackman films ...

To be honest, I wasn't even familiar with Bite the Bullet until I saw it listed on the cable guide and just decided to watch it. Glad I did though, I enjoyed it and Gene Hackman was a great as usual. After reading about the film it's interesting to note that Hackman was cast after Charles Bronson turned down the lead role. Probably for the better as I don't know that Bronson would've been as sympathetic in the role as Hackman was.
Top

The Great Northfield Minnesota Raid (1972) starring Cliff Robertson, Robert Duvall, Luke Askew, R.G. Armstrong, John Pearce, Matt Clark & Wayne Sutherlin. The James-Younger gang attempt to rob the First National Bank of Northfield. The Great Northfield Minnesota Raid is western film that tells the story of the bungled robbery of the First National Bank of Northfield, Minnestoa which led to the downfall of one of the most famous gangs of the old west, the James-Younger gang. I'm not entirely sure just how accurate the film is, but based on what I've read about the Northfield, Minnesota Raid, there's certainly some fiction (or Hollywood fantasy if you will) thrown in with fact within this film. Not-to-mention that while the cast are great in their roles, all the actors playing members of the James-Younger gang were too old for the roles. That said, there are some very good performances in the film, particularly by leads Cliff Robertson as Cole Younger and Robert Duvall as Jesse James. The film was shot in a cinéma vérité style and has an authentic feel to it and the settings look realistic. Regardless of it's historical accuracy, The Great Northfield Minnesota Raid is entertaining and a very good, gritty western film. 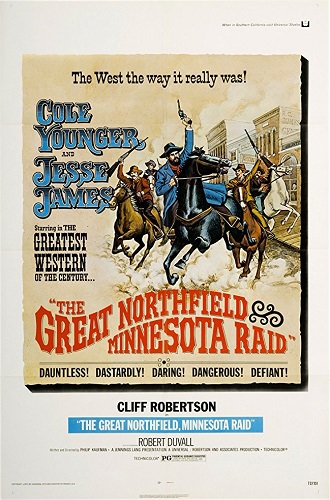