sticksb wrote:Yes . I've got the old VHS of this. Palance did his whole performance on
the first take (he was actually a great boxer before acting) . The ending
of the play is different from the movie for a more tragic effect . Serling
also boxed in Syracuse when he went to the University . The bin at the
pawn shop also had a copy of the best of season #1 of the Twilight Zone.

Can't go wrong with The Twilight Zone. I've also read about a British television version of Requiem for a Heavyweight titled Blood Money from 1957 which starred Sean Connery, but apparently it hasn't survived. Which is a real shame.

Gymkata (1985) starring Kurt Thomas, Tetchie Agbayani, Richard Norton, Buck Kartalian, John Barrett & Bob Schott. A champion American gymnast is specially trained by the U.S. government and sent to a small European country to compete in & win a deadly game in order to secure a satellite monitoring station. Gymkata is a martial arts action film starring former World Champion & Olympic gymnast Kurt Thomas and directed by Robert Clouse of Enter the Dragon fame. The title is suppose to refer to Kurt Thomas' character's fighting style, a mixture of gymastics & karate (though it's never stated in the film), and even though Thomas wasn't a martial artist, I think he did a pretty decent job of mixing whatever martial arts training he received for the role with his world class gymnastic ability. There are some experienced & skilled martial artists in significant roles including Richard Norton (who also did the choreography), John Barrett, Bob Schott and in minor roles as trainers, Tadashi Yamashita & Sonny Barnes. The film itself has kind of an absurd plotline and a subpar production quality, and comes off as unintentionally funny at times. Gymkata definitely isn't one of the best martial arts movies you'll ever see, but it has a certain campy charm to it and is pretty entertaining. 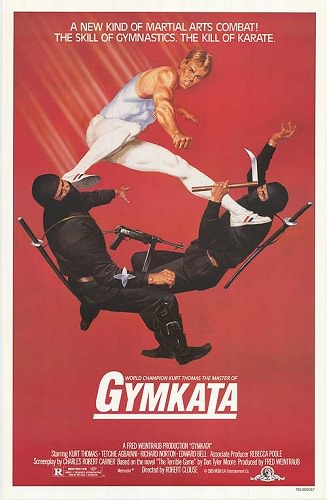 Never Too Young to Die (1986) starring John Stamos, Vanity, Gene Simmons, Peter Kwong, Ed Brock, George Lazenby, John Anderson & Robert Englund. After a secret agent is murdered, his estranged son teams up with an attractive female secret agent to stop a psychopath planning to poison the water supply of a major city. Never Too Young to Die is an action comedy with a sort of "Son of James Bond" vibe. Former 007 George Lazenby plays the role of the James Bond-like Drew Stargrove and seems to have fun doing so, and in his first feature film starring role John Stamos plays his son Lance Stargrove. Rock legend & KISS frontman Gene Simmons play the villain, a campy & odd one to say the least, an evil hermaphrodite named Velvet Von Ragner. You get the feeling the goal was to start a franchise with this film, but the amount of success it achieved, or lack thereof, didn't warrant a sequel. Never Too Young to Die is a pretty fun B-action comedy and amusing for what it is. 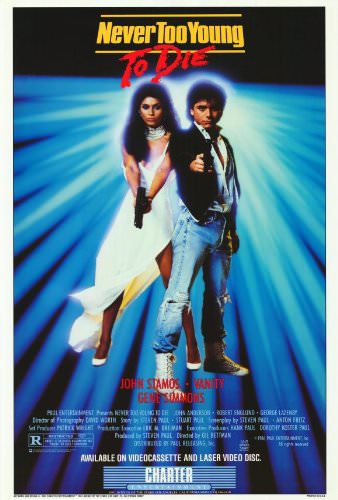 Deliverance (1972) starring Jon Voight, Burt Reynolds, Ned Beatty & Ronny Cox. What starts off as a fun canoe trip turns into a fight for survival for four city men as they endure the north Georgia wilderness and the dangers that lurk there. Deliverance is an adventure/thriller film directed by John Boorman and based on the 1970 novel of the same name by James Dickey (who also wrote the screenplay), and is the film that established Burt Reynolds as a major movie star. The main cast of Voight, Reynolds, Beatty & Cox are incredible and do a superb job of showing how the events along the way affect their characters and how it changes them from how they were at the the beginning of the film. Bill McKinney & Herbert 'Cowboy' Coward are noteworthy as well as a couple of creepy backwoodsmen the city boys have the misfortune to run into. The scenery featured throughout the film is breathtaking and the cinematography by Vilmos Zsigmond magnificently captures the Georgia wilderness. Also of note, the film features the now classic instrumental "Dueling Banjos" in a very memorable scene early on, though the musical dueling is actually between a banjo & guitar. Deliverance is a haunting and at times disturbing film filled with adventure, suspense & thrills, a true classic. 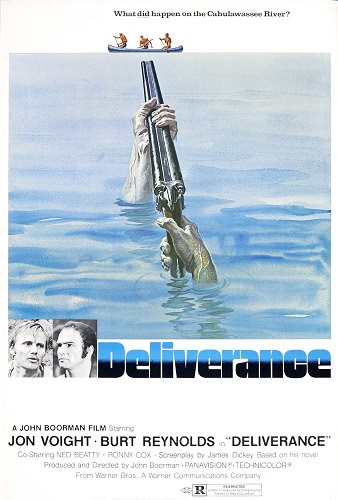