Muscular Heroes (if not directly PC)

Join the Discussion Group! We invite you to share your comments, insights and questions on the History of Physical Culture.

Harry Hayfield wrote:Standing now 6ft tall, weighing close to 220lbs and, thanks to said treatment, gifted with strength that makes him a powerhouse, he is promoted to the rank of Captain and simply called Captain America and the army cannot help but rub their hands in glee. However, if only military operations were that simple. See that person on the right? That's Heinz Kruger, a German spy, who has been told to try and stop the production of the serum (which he does by killing Dr. Erskine, which does the trick as he committed the formula to memory). But he doesn't win, because the newly empowered Steve gives chase causing Heinz to trip over some wires and electrocute himself (meaning that Steven is the only person to become a super soldier) and before he can recover he is sent out into the field.

Interesting that they picked 6ft & 220 as the standard for a 'super soldier'. I assumed (wrongly) that the actor Chris Evans (the movie Cap) was around 6'2" - but apparently he is bang on 6, but only a mite over 200lbs.

Internalfitness wrote:Interesting that they picked 6ft & 220 as the standard for a 'super soldier'. I assumed (wrongly) that the actor Chris Evans (the movie Cap) was around 6'2" - but apparently he is bang on 6, but only a mite over 200lbs. Richie.

There has actually been a lot of discussion about how tall and heavy he is actually is. The Marvel Wika states he is 6ft 2 and 240lbs, whilst Marvel.com says he stands 6ft 2 and 220lbs. So I placed it at 6ft and 220lbs as a sort of compromise between the two (which incidentally is a BMI of 29.90) which is where most modern day bodybuilders sit at.
"Great heavens, what is there to adulate in me? Am I particularly intelligent, or remarkably studious, or excruciatingly witty, or unusually accomplished, or exceptionally virtuous?"
(The Duke of Dunstable, Patience by Gilbert and Sullivan)
Top

Harry Hayfield wrote:As the war progressed it was almost as if every Tom, Dick and Harry was getting superpowers to help with the war effort. The Flash was being doused with chemicals during a thunderstorm and discovered he was the fastest man alive, a biochemist stumbles across a vitamin that makes him the strongest man alive for an hour at a time and becomes known as Hourman, The Green Lantern finds a lantern that when crafted into a ring gives him superhuman powers, which is all very well and good but what about someone who could never hope in a million years to be as big and strong as these heroes and yet wanted to do his bit in the war? Enter Billy Batson.

Billy really has had it tough. Homeless, through no fault of his own, he's a newsboy whose interest in a mysterious stranger leads him to a secret subway tunnel, inside of which is a subway car with no visible driver takes them to an underground tunnel with seven statues depicting the Seven Deadly Enemies of Man (Pride, Envy, Greed, Hatred, Selfishness, Laziness and Injustice). And who is this mysterious stranger? A wizard by the name of Shazam. Now, this wizard was an exceptionally old wizard (having been born in Ancient Egypt) and, well, to be honest he's fed up with humanity that is until Billy comes along. He can't put his finger on it, but he believes that Billy has the best of human nature in him and so he gives him the abiltly to become a man who has the wisdom of the king of Israel Solomon, the strength of the Greek god Hercules, the stamina of Atlas forced to separate the sky from the ground, the power of Zeus the king of the Greek gods, the courage of Achilles the Greek military leader and the speed of Mercury, the messenger of the Greek gods. As you can imagine Billy is rather taken away by all this and doesn't want them at first, but when the wizard tricks him into saying his name, he becomes transformed into Captain Marvel. However, his first transformation comes at the cost of the wizard's life as a stone balanced above his seat crashes down and crushes the wizard to death, but his ghost advises the Captain that whenever a brazier, a type of barbeque used in ancient times, is lit he will pass on vital information.

Well, this certainly puts a new spin on things and before Billy knows where he is, he becomes a news reporter for a local radio station (very handy for finding out about things that shouldn't be going on) and soon gets involved with the likes of Superman (which whom he has a very friendly relationship with)

Another superhero I really like, though I really dislike it that DC Comics has since actually changed his name from Captain Marvel to Shazam. Anyway, a lot people today wouldn't know it, but once upon a time (during the 1940s to be more exact), Captain Marvel was the most popular superhero, more so than even Superman.

One my favorite comic book images; Captain Marvel standing over Superman from the Kingdom Come mini-series in 1996. Not only an awesome image, but awesome artwork as well. 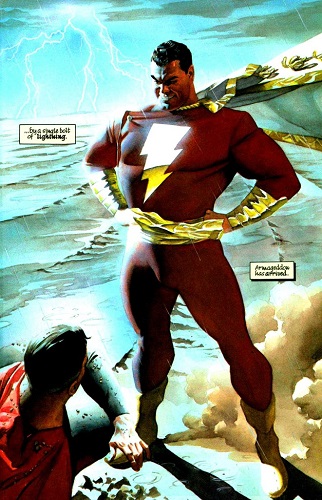 The campy movie from 1980 with Sam J. Jones as Flash Gordon & Max von Sydow as Ming the Merciless, and the awesome theme song by Queen?

That's the one - they both went for the 1930's serial feel - and pulled it off pretty well!

Yeah, I've seen the 1980 Flash Gordon movie multiple times and enjoy it, so I'll have to check out the old Doc Savage movie sometime since it's got the same kinda feel as that.

sticksb wrote:
IMG.jpg
[img]
IMG.jpg
[/img]I was knee deep in comic books as a kid . Obviously it had a lot of influence
on what I doodle . As I developed a certain style I found it easy to apply . A picture = etc. I found it a nice way
to make some friends (and an occasional enemy) . As my pals often say , " Sticks , shut up and DRAW " LOL .

After the Second World War, superheroes started becoming more and more outlandish (and by association even bigger, stronger and muscular) but it was decided that perhaps they should start working together more and so the Legion of Super Heroes was born in 1958. Founded by Cosmic Boy, Saturn Girl and Lighting Lad they soon grew to include a vast number of other heroes including Superboy (Superman as a young lad), his sister Supergirl, and the Karate Kid (before the film). One of the members called Blok was built like a brick outhouse (because that's precisely what he was made of).

Blok, a resident of the planet Dryad, first appeared on the scene in 1979 but made quite the impact. He was manipulated by the Dark Man, a clone of Tharok, into attacking the Legion of Super-Heroes, on the pretext that the Legion were going to destroy his homeworld (which was a bare faced lie). When he learned that the Legionnaires were not his enemies, he turned on the Assassins and eventually joined the Legion but didn't know anything about his home world bar that everyone was made of silicon. He didn't even know if he was an adult or still a child. If he was a child, then my word, what must the adults be like?

He stands a good 8ft tall and because he is made of silicon (which has an atomic weight of 28.0855 amu (Atomic Mass Units)) he is one of the strongest members of the team and doesn't think twice about uprooting trees and the like. Although that said he comes across as rather a lonely fellow longing for the day that he is able to find a planet that houses nothing but silicon based life

"Great heavens, what is there to adulate in me? Am I particularly intelligent, or remarkably studious, or excruciatingly witty, or unusually accomplished, or exceptionally virtuous?"
(The Duke of Dunstable, Patience by Gilbert and Sullivan)
Top

^Blok is another new one on me. He seems reminiscent of The Thing from the Fantastic Four. Anyway, good work Harry!
Top

According to reports, the average height for men in Wales is 5' 10" (70 inches), therefore anyone more than 10% taller than that (6' 5" or more) would be classed as a giant, so yes, Shaq would indeed be classed as a giant, but in this context we are focusing on Muscular giants (i.e people who are not only taller than average, but more muscular, for example lean body masses of at least 200lbs)
"Great heavens, what is there to adulate in me? Am I particularly intelligent, or remarkably studious, or excruciatingly witty, or unusually accomplished, or exceptionally virtuous?"
(The Duke of Dunstable, Patience by Gilbert and Sullivan)
Top