Join the Discussion Group! We invite you to share your comments, insights and questions on the History of Physical Culture.

Thanks for posting this Danny.Yes indeed impressive and inspirational. God bless him.Sorry there were so few people in attendance to witness this though.
Regards,Peter.
Peter Yates
Top

That was awesome! I wanna know how he trains!!
Top

Two of the oldest guys i knew who trained right up to the end, were. 1.Les Mc Gowan from near Bournmouth, Les even appeared at one of the U niverse shows lifting two heavy dumbells, must have been in his 80s, he died after his wife age 93,. the other one was Joe Assirati, cousen of Bert the wrestler, Joe died age 98, I along with Lee Morrison went for a walk with him, then about 95 and he was doing calf raises on the kerb , semi press ups against a wall, always active and he loved singing. Mobster also came along with me to Joes, Joe left me most of his collection, the rest went to Jan and Terry Todd for the Austin Texas museum where David Webster works hard sorting out all the old pix, noone else able to recognise most of the photos except Dave with his extensive knowledge. David Gentle.
David Gentle
Chief Moderator
Author & Historian,
Physical Culture
https://davidgentle.com
Top

Recently had an email from Arnold Betts in New Zealand. He is doing well and just as keen on training as when he started as a young lad. Besides using Maxalding and expanders for his main training he keeps busy with gardening and work around the house. A local gym owner who read about him offered him a free membership but he declined.He said that the gym scene has changed so much since he was training with Roy Perrot and others that he feels no connection with it. Anyway good to see he is still at it and enjoying the benefits of a lifetime of sensible training.
Regards,Peter.
Peter Yates
Top

One well known gentleman who has just joined the Octogenarian club is Mr. Ripped, Clarence Bass. Clarence has had a lifelong commitment to a healthy lifestyle and has reaped the rewards. Starting out after finding a copy of Strength and Health magazine as a teen he first competed in Olympic lifting and switched to bodybuilding in his early 40s winning such competitions as past 40 Mr. America and Mr. USA. He was always famous for his low body fat and ripped physique before ripped came into style. He has yearly check ups at the Cooper clinic and is always placed in the top percentage in his age group but really he probably is in much better condition than most in any age group. He has been a Lawyer,author of many training/nutrition books and wrote for Muscle and Fitness magazine for many years, all while raising a family.In recent years he has had both hips replaced but being in such good physical condition recovered quickly and got back into training. As far as training goes he has always been an advocate of HIT style and for cardio HIIT, these days doing one session of each per week plus hiking in the hills near his home with his wife. Check out his website "RIPPED," which contains a lot of good information, with the science to back it up,especially for those who are getting along in years.Wish him many more years doing what he loves doing.
Regards
Peter Yates
Top

Thanks Peter, I didn't realize Clarence Bass was in his 80s now. He's still looking awesome & impressive too. What an inspiration. 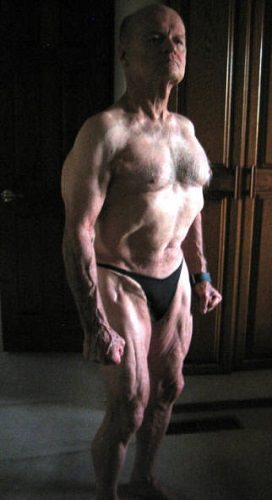 Hi Danny, there is little difference in his physique and yearly work up than when he was 70 so he is certainly doing something right.
Regards,Peter.
Peter Yates
Top

At the recent AOBS event there were several attendees in their 80's, most still training at some level.A standout for his vibrancy,energy and great smile was Dominick Juliano,1953 Mr.Muscle Beach, 1963/1964 IFBB Mr.America, 2nd place medium class. Terrific inspiration.
Regards,Peter.
Peter Yates
Top

Recently heard from Arnold Betts in New Zealand. Arnold is now 85 and still enjoying his Maxalding and expander training. A real inspiration and shows that with adjustments for the individual, exercise can, and should be continued throughout life. Another Gentleman, previously mentioned, who is also an inspiration is former police officer and wrestler Carl Linich. Even after severe back injury Carl never stopped training and now uses light dumbbells to perform a series of exercises non stop for up to 80 reps at a time.Carl's battle cry is "still breathing defiance." When training is a part of your life you will find ways to keep on training despite circumstances as these and the other Octogenarians show us. May they continue to do so for many more years.
Regards,Peter.
Peter Yates
Top

Glad to see our buddy Carl make the list. As Peter said, just a quality human. I've been to Carl and Audrey's many times and they have been here to my place.

I had a little site about Carl and others here:

Carl bought that large Jackson Globe barbell right from Andy Jackson (they were close friends) when he retired from the police force when he was still in his 40's. I now own that barbell, I got it from Carl.
Its a beauty. (Pic of Andy and Carl attached). OF course I have a pic of Carl and I in front of the famous barn gym. : ) (Ill try to dig it up).

We took a video of Carl speaking at AOBS one year. Dont mind the back of my balding head, gets int he way sometimes : )